The RAC Club Epsom was a lovely place to play my last gig of 2015 on New Years Eve. It was a wonderful setting and we had some great musicians to play in the New Year. The venue had been decorated in the style of a casino, and roulette and card tables had been provided to give it an exciting atmosphere. Although we were playing predominately jazz swing music we decided to liven things up towards the end of the evening, and we played a range of different dance styles. A fabulous event from start to finish, I always enjoy playing on new years eve as it means I start the new year on a musical high. 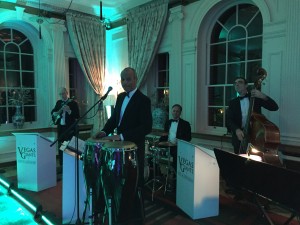 Over the years I’ve had quite a distinguished career as a guitarist. I’ve played in most of London’s West End theatres on shows such as Lion King, Les Miserable, Phantom of the Opera, Sunset Boulevard and Mama Mia. I’ve performed on TV and in films, and toured the world several times over. I’ve graced the stage with famous musicians from Will Young and Shirley Bassey to John Williams and the London Symphony Orchestra. This weekend however I’m going to be performing at a much more intimate and local venue.   I’m looking forward to playing my first gig at The Salterton Arms in my new hometown of Budleigh Salterton on Saturday 24th October.

Budleigh Salterton is a thriving musical town with live music at the many festivals throughout the year. When my family and I first arrived here I was able to head on down to the Jazz Festival held annually in Budleigh Public Hall. It was an opportunity to listen to and catch up with a few of my old musical friends from London who were performing. There was a locally based guitar led trio playing before the main band and they sounded great. I introduced myself to the guitarist, Dave Hardman, who also lives in Budleigh Salterton and we arranged to meet up for a play and guitarist natter. We’ve been getting together on a fairly regular basis since then and so Dave had a word with the landlord of the Salterton Arms and secured us a gig at our local pub.

I’m really looking forward to performing within walking distance from my home. We will be playing a mixture of jazz standards, latin and jazz rock, so come along from 9pm on Saturday 24th October at the Salterton Arms, Chapel Street, Budleigh Salterton. 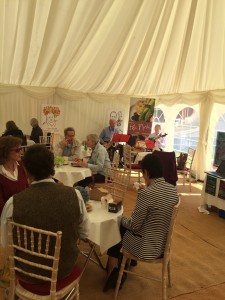 Thoroughly enjoyed playing at my first local gig in my hometown of Budleigh Salterton in Devon earlier today.  I was delighted to perform at the renowned Budleigh Salterton Literary Festival with the fantastic Chris Gradwell on Sax and Clarinet.  Chris and I have known each other for years and worked on various things up in London over the years.  We’ve both worked with the London Symphony Orchestra and various West End Shows.  So when I relocated to East Devon with my family earlier this year it was the obvious thing to hook up with Chris who lives down this way.

The Budleigh Salterton Literary Festival is a fabulous event in East Devon, boasting top authors, with many events and readings not to mention book launches and book signings.  We were invited to perform in the Marquee on the Green, and entertained a couple of hundred people over the course of our set.  Typically this type of event we would be playing background music, and so we were absolutely delighted to receive much applause throughout our set.

There is one more day of the festival remaining, so get yourselves along tomorrow if you are able.  We have already been rebooked for next year though, so if you don’t make it along tomorrow then put it in your diary for 2016.

Whilst recently working up in London I took the opportunity to record and film my father playing the piano. When I was young he was the biggest musical influence in the early years of my playing the guitar. I think I’d learnt many jazz standards even before I began to play the guitar just by hearing him play at home.

My brother (who used to play the drums) and I gained experience playing live and would gig together with my dad as a trio in working mens clubs and pubs. This was very beneficial to me, as I became comfortable and confident playing in front of people at quite a young age.

My dad, now 82 years of age, still enjoys playing the piano, which shows that making music is a lifetime journey.

I really enjoyed the gig at Wimbledon this year. The weather was perfect, not too hot or cold and remained dry throughout.

It was the same group of musicians as previous years, and although we only get together once a year the band gels immediately.

We played a mixture of jazz standards and original songs by Mark Allaway, all played in Bossa Nova or Latin feel which seems to work really well.

As usual we spotted a few famous people milling about, you may even recognise one at the beginning of the movie clip below.

It was great to play my first gig in the South West since moving to Devon a few months ago, and it made a change not to have to do a long trip to London and back. It was at the Hall For Cornwall in Truro playing a show called Westcoast. The show is a celebration of the Beach Boys and their fantastic collection of songs. 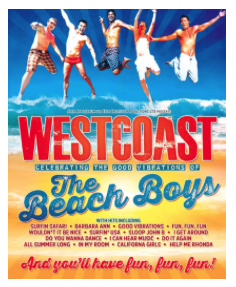 We didn’t get time to rehearse all the songs but it all seemed to come together really well on the night. The audience really enjoyed it. The band were really great, and the singers created some fabulous harmonies as they performed these great songs. I’d forgotten how many tremendous songs the beach boys had actually written. Well worth checking out in the future if you like the music of the Beach Boys.

For any of my local pupils who enjoy ragtime and blues guitar ‘My Black Hat’ are playing at the Salterton Arms in Budleigh Salterton this Sunday 21st and every third Sunday of the month from 8.00 to 11.00. The guitarist, Ian Gardner plays one of the nicest guitars I’ve heard in a long while, it’s a Sigma 28VS which sounds as good as any Martin I’ve ever heard. Get along if you fancy an evening listening to some quality guitar playing. 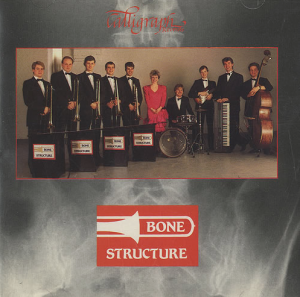